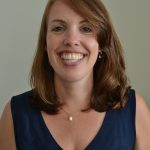 Hanne Claessens (°1984) holds a Master’s degree in Comparative Cultural Studies. During a Master after Master Conflict & Development and a postgraduate International Research Journalism she sharpened her pen and broadened her horizon. Her focus was on American imperialism, the Kurdish question in Turkey and the conflict between Israel and Palestine, in which she deepened even further during study trips and internships as a journalist at MO* and as a researcher for the Flemish Peace Institute in the Flemish Parliament.

For MO* she then examined Thai marriage migration to Belgium and for ‘Samenlevingsopbouw Antwerpen stad vzw’ she wrote a manual for mediators in neighbour and neighbourhood conflicts. As the person responsible for the study department and communication at the Centre for the Prevention of Suicide, she broadened her knowledge in the field of assistance, mental health care and suicide prevention. She then used this knowledge as a researcher and project leader ‘psychosocial problems in general practice’ at Domus Medica. At the University of Antwerp, she worked on a large-scale research project with general practitioners’ practices, guard posts and emergency departments in the Leuven/Tienen region on the integration of general practitioners in urgent medical care and the organisation of care outside office hours.

As a researcher and research coordinator at the Applied Psychology course at AP University College, Hanne is working on a study on cultural sensitivity in recruitment and is committed to putting research in this course on the map. She is part of the core team of the iSOS knowledge centre.